In any facility, preparing for, responding to, and recovering from a disaster is complicated. In a hospital, “complicated” is an understatement.

In most cases, a mass evacuation is extremely dangerous. If the emergency affects surrounding areas, there will be a huge influx of new patients. And, if the situation lasts for more than a day or two, life-saving resources will run low.

However, even with such a variety of challenges, there’s one thing that can improve any hospital’s disaster preparedness: communication.

In fact, when the Office of the Inspector General surveyed hospitals in the areas affected by Hurricane Sandy, communication issues were the 3rd most commonly cited challenge.

And nothing protects and facilitates effective communication before, during, and after a disaster quite like cloud-based information management technology. 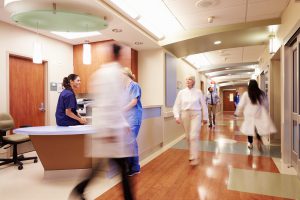 Imagine that a hospital’s staff must evacuate the building for some reason. With everyone out of the building, how many of those people will have their phones on them? And how many will have the binder or flipchart with the emergency plan?

With a cloud-based information management tool, whoever has a phone has access to the emergency plan. Moreover, even if the electricity is knocked out and there’s no internet, hospital staff will still be able to pull up the plans, as long as the files are saved locally.

That’s a big deal because, as the Office of the Inspector General (OIG) found, 45 percent of hospitals in the areas affected by Hurricane Sandy had serious challenges with their electrical utilities. In fact, electrical utility failures were the most frequently reported challenge in the OIG’s survey.

Storing emergency plans in multiple places and formats, as the California Hospital Association points out, is “imperative in emergency preparedness planning.” At the very least, cloud-based information technology gives you another secure place to store emergency plans.

But it does more than that.

Regardless of any damage, such as flooding above the plan room or downed computer systems, the cloud stays intact. And so long as someone has a phone, tablet, or computer, everyone has access to the emergency plans.

In an article I wrote for Healthcare Facilities Today, I discussed the shifting attitudes within the healthcare IT world as it relates to cloud-based technology. In short, an increasing number of healthcare executives are shifting their infrastructure to the cloud, and the superior resilience of the cloud is one of the reasons that shift is happening.

If you’ve ever synced photos or music to multiple devices, you already know how quickly cloud-based tech can update information. For emergency managers who must ensure that the hospital’s staff stays up to date with training, the cloud provides a huge advantage. Rather than adding new documents to a binder or sending an email to explain new updates, emergency managers can simply upload new documents or make changes to existing ones.

From there, the update automatically applies to every staff member’s device.

The ability to pull up emergency information like floor plans, evacuation routes, and more – on any device, means that emergency managers can 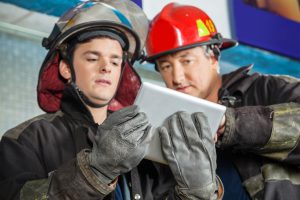 Because plans are updated automatically as emergency managers make changes, there’s no concern that information is out of date. And, if anyone forgets or is unable to grab paper-based plans, so long as one person remembered their phone, the plans will be accessible if they’ve been stored on the cloud. Some cloud-based tools, such as ARC Facilities, offer users the ability to send texts and emails with emergency information to any other phone, including a first responder’s cell.

In the Office of the Inspector General’s report, which I referenced in the introduction, electrical utility issues were the most common challenge among hospitals in the areas affected by Hurricane Sandy. Since we rely on electricity for internet access and emergency plans are often stored in shared file drives, electrical failures may prevent access to digital emergency plans.

With many cloud solutions—though not all—shared files are immediately updated in the local drive. This means that, as soon as information is updated and synced, it becomes available on your device even without internet access.

In any emergency plan, there must be a plan for how the organization can transfer functions to a different facility and back again, points out certified emergency manager Valerie Lucus-Mcewen of GovTech magazine. This part of the plan, she said, becomes a no-brainer with cloud technology.

After all, during the disaster, staff at another location can access any data they need and it will be current as of the moment the disaster occurred. Similarly, transferring functions back to the original facility is seamless.

Pascal Schuback, a program coordinator for King County, Washington Office of Emergency Management sums it up well. He said, “The cloud is going to change the whole mentality of emergency management. Responders can be anyone with connectivity, the public included.”

Of course, it’s one thing to know the ways technology optimizes disaster preparedness for hospitals and it’s an entirely different thing to put technology into action for your organization. To get inspired with ideas for implementing cloud technology, read our paper called, Emergency Preparedness: Critical Planning for Healthcare Facilities.