A Summer of Service

It’s amazing how fast the Summer is flying by, isn’t it?

The kids are already starting back to school, next week we’ll witness a total eclipse of the sun, Labor Day is around the corner, and before you know it we’ll be watching the leaves change and the rain fall in Autumn.

There’s a lot that goes on in Summer, and for many of us, much of it is in the service of others. We thought we’d spend a moment showcasing what so many of our people do, especially in the communities where they live and work.

Brian Watamura, out of Hawaii, likes to fish, but to him its more than just dropping a line in the water. At the beginning of this summer, he and 21 like-minded fishermen from the Waialua Boat Club, hauled in nearly a ton of ahi, marlin, aku, mahimahi, ono, uku, and ehu as part of the Fishing for Hawaii’s Hungry Tournament. 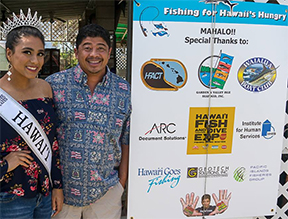 Even Miss Hawai’i couldn’t stay away from the fishing tournament where ARC was a prominent sponsor.

All of the 1,734 pounds of fish – some of it trophy quality  – was donated to feed guests of the Institute of Human Services. This organization serves more than 750 meals a day, often to homeless and other disadvantaged people in Hawaii. Protein is often hard to come by, and most of the time it’s in the form of ground beef, so needless to say the meals from IHS took a serious step-up with this donation!

Ross Banks, our VP of Many Hats out here on the West Coast, is an endless source of energy in his community and beyond. Each summer for the past 11 years, Ross heads to La Morita in Tijuana, Mexico, as part of the “TJ Mission Outreach Foundation,” a program that honors the work of a former principal and president of Damien High School in Los Angeles.

There’s a lot of work to do in La Morita, and everybody knows that’s Ross’s specialty!

It can be a dangerous trip and a dangerous area to work, but Ross’s group travels to TJ every summer and builds about six homes in the poverty-stricken area, as well as classrooms and small churches. Later in the year they return to distribute food and supplies for up to 400 families. To date the program has built 100 homes, 12 classrooms and six churches, and distributed literally tons of food and supplies!

Mike Mahan, out of Boise, works closely with St. Luke’s Children Hospital all year long, including fundraising activities, modifying toys for kids with special needs, and setting up activities and events for young patients. He has a grandson who benefited from the great care they provide at the hospital, and his way of giving back has been to serve on the Advisory Board for 12 years! 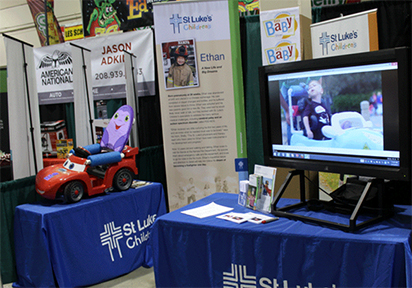 At a local car show, Mike helped showcase the electric toy cars St. Luke’s Children’s Hospital modified so kids with disabilities could get out of their wheelchairs and roll in a different way!

Mike’s also getting ready for a “Never Forget” 9-11 memorial golf tournament in memory of the Fire Fighters, Police Officers, and EMS personnel who died during service on September 11th, 2001, and Idaho public safety officers who have fallen in the line of duty. While there are plenty of great sponsors for the tournament, ARC is the only original one still on the roster!

On the Professional front…

We’ve got a ton of individuals who obviously take pride in the service they provide to our professional communities. People from every department within our local service centers have been called out and praised with glowing words for their efforts. More than 4,000 reviews are up on our website, with an overwhelming majority expressing their appreciation for the work we do as a company and as individuals. You can find them here: https://www.e-arc.com/reviews/

Inside ARC, we’ve got even more service to recognize…

First, we had two notable retirements this season: 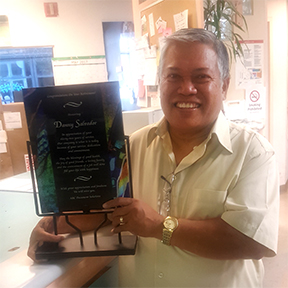 Danny Salvador, Assistant Manager, at our Oakland shop retired after 32 years. Joining the company in 1985, Danny was one of the first ARC employees when we entered the San Francisco/Oakland market. His coworkers said it was difficult, if not impossible, to sum up his achievements during his long tenure. Danny’s hard work, commitment, and dedication to the company and our customers are worthy of admiration.

Congratulations on your retirement, Danny, and thank you for your service! 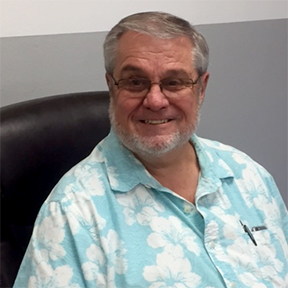 Mike Hoover, our Director of Purchasing from SoCal, and Cathy Page’s “go-to” guy for the past 21 years, retires this summer, too. He’s been in the business since 1976, and he’s worked in just about every department you can think of — accounting, operations, purchasing, sales and management. In 1996, he joined the former Consolidated Reprographics as head of purchasing, and became an integral part of our SoCal organization. Words he lived by at ARC: “Show respect for those you work with and try to see things through their eyes.”

Best wishes on your retirement, Mike. Thanks for your service!

Finally, since our last update on long-time employees we’ve heard from a number of people who just couldn’t let their peers go un-noticed.

An additional 35 employees were acknowledged by the people they work with. If you’re rubbing elbows with these folks as a customer or coworker, or even just passing in the hallway, be sure to stop and congratulate them on their successful careers and service to ARC and its customers.

NorCal/Oregon/Seattle employees have milestones that can only be envied:

Twenty-five years ago we were lucky to hire Derek Reagans, Ananda DeSilva, and Dane DeSilva; and right on their heels with 20 years of dedication are April Cioni, Roberto Jimenez, Randy Abbott, Brian Blum, Herbert Roach, Janice Barkely, and Jeanine Farley.

Down SoCal way, we’ve got…

Robbie Watson from Pasadena, and Walter Mayen from Beverly Hills, with 38 years.

My pal, Lettie Torres, from Pasadena has 33 years (and who, almost 18 years ago, showed me how to stay on the straight and narrow path of our accounts payable system).

Vicki Kirnberger from Pasadena has 31 years, as does Ross Banks, who seems to come from everywhere, and who will apparently go anywhere!

In Michigan, we’ve got…

Ann Jaksa, who Bill Dun calls a “superstar service center manager” has been with us since June 17, 1981 (that’s 36 months for those of you tired of doing all the math).

Out of our Oklahoma Outfit are…

And the last update I got was from Louisiana where…

Wow! That’s a lot of service! Since Summer started we’ve celebrated nearly 75 people on our staff with 20 years or more. It’s that kind of loyalty and dedication – not only to ARC, but to each other – that played such a big role in inspiring the upcoming Service Awards Program Suri recently announced.

Any organization is more than the sum of its parts, and ARC is no exception. Well done, all of you!

THANK YOU, and enjoy the rest of your summer.

David has been with ARC since nearly the beginning. During his time at the company, he's provided his business communication, public relations, marketing consulting, and, of course, investor relations expertise. He holds a degree in journalism from the University of Missouri in Kansas City.