Sustainable Imaging: Easy on the Eyes and the Environment

Between the chemicals used to develop images, along with processed substrates, industrial coatings, and varnishes, it didn’t take much to make what today would be considered a toxic mess.

Today, environmentally-friendly options aren’t just available—they’re becoming easier to find, less expensive, and better performing. Plus, our customers are more aware of them too.

So as part of ARC’s Environmental Series, in this post, we’re going to highlight two recent projects which used environmentally friendly materials. 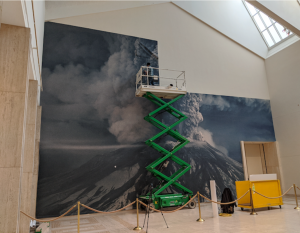 Established in 1892, the Portland Art Museum (PAM) is the oldest art museum on the West Coast. With more than 42,000 works of art on display and 350,000 visitors per year, when it comes to exhibiting great art, the museum’s curators know what they’re doing.

So when the 40th anniversary of Mount St. Helen came around, PAM’s curators wanted to do something special. They decided to open an exhibition displaying various artists’ responses to the awesome beauty and power of the volcano.

To form a backdrop for the exhibition, the museum’s curators wanted to mount a 45 by 40-foot wall mural depicting the eruption. Of course, they wanted the mural to be recyclable and plastic-free. Fortunately, Jeff Smith, ARC’s Branch Manager in Portland, was able to source a polyester peel-and-stick, removable media from a Canadian manufacturer called PhotoTex.

The fabric-like material fit the bill perfectly, and with the help of a talented crew of installers, Mt. Washington was soon erupting again inside the storied museum. 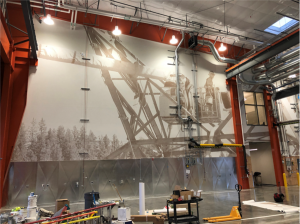 The call for ARC’s next sustainable project came from Bonneville Power Administration (BPA). Like the museum, they wanted a large wall mural, except this one needed to cover a 140-foot long wall.

On the bid, BPA specified a PVC-based, wallpaper substrate that would have to be glued to the 140-foot long wall. Though ultimately, what BPA wanted was an adhesive, durable mural that would stand the test of the time.

Knowing this, the ARC team discussed the job further with BPA’s representatives. And it became clear that gluing a PVC graphic over that span, especially with all the cut-outs and odd-shaped panels, would be challenging and expensive. So ARC suggested PhotoTex.

The product had been used for many multi-year projects before and reduced BPA’s installation costs by two-thirds. Plus, PhotoTex had the bonus of an easy-on-the-conscience environmental impact.

BPA bought in, but that wasn’t the end of the challenge.

As the gigantic mural began to take shape, it became unwieldy. While you could see the image from 25 feet away quite clearly, it was difficult for an installer to know what went where. Fortunately, with the experience and expertise of ARC’s color production manager, the panels were coded for proper installation.

Once it was all mounted, the client was thrilled with the mural which memorialized the linemen and landscape of the BPA.

With our work, the first thing that captures attention is the image. But there’s also a sense of pride for us and our clients when we know that our production methods support an eco-friendly approach.

From the inks to the print media, we know our graphics are helping our clients achieve their sustainability goals and aspirations. And we know we’re doing our part to reduce environmental impacts.

Did you enjoy this story? Want to hear more sustainability success stories. Check out the first or second post of our Environmental Series. Then, keep an eye on our blog for the fourth edition!